I’m a serious advocate for safe cycling so a review of headphones would on the face of it seem like a strange thing.

However, at the NEC Cycle Show in September 2018 I played with, and was impressed enough to buy, a set of Aftershokz ‘Bone Conduction’ headphones. What makes these different from any other normal headphone is that they don’t cover or go in the ear and make it easy to hear the environment around you.

How do they work? 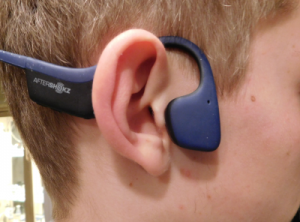 In contrast to traditional headphones these don’t work purely by sending sound directly in to the ear. Although they do produce some sound, they also produce miniscule vibrations that are transmitted through the cheek / jaw bones to the eardrum which then creates the sound you ‘hear’. To achieve this effect they sit just in front of the ear rather than on it or in it, thus leaving the ear open to receive sounds from the outside world. The result of this for a cyclist is that you can ride and listen to music safe in the knowledge that you will be able to hear everything else going on around you.

These are Bluetooth only headphones so there are no wires to get tangled up but it does mean they will need charging regularly and can only connect to Bluetooth music sources such as a smartphone. Charging is done through the now ubiquitous micro USB port.

How well do they work?

The simple answer to this is – very well.  With the headphones in place and switched on it is very easy to listen to music whilst cycling and still be able to hear approaching traffic. There are controls on the headphones that allow the volume to be adjusted on the fly, there is also a multi-function button that allows the wearer to interact with their smartphone in various ways. This is because not only is this a set of very capable headphones, it also doubles as a handsfree calling device allowing the wearer to make and receive phone calls. In tests I used the headphones to call people while being on the move and all reported that they could hear me clearly as I could them. Another plus point is that they are IP55 rated which means they are resistant to both sweat and very light rain.

These aren’t the cheapest Bluetooth headphones around at £149.95 but if you really want to hear music on while riding and are concerned about safety then there really isn’t anything that comes close at the moment.

Whats in the box?

If you found this review helpful please consider supporting us by buying a tea at www.buymeacoffee.com/cyclinglabs