A good set of lights are probably one of the most important accessories that you can add to any bicycle, and generally come in one of two types

The See.Sense Ace  is of the latter variety, and we have to say that we’re impressed by what we’ve seen.

This compact set of front and rear lights are relatively expensive for a set of tracer lights but they have a comprehensive set of features that certainly go some way to justifying the price tag such as: 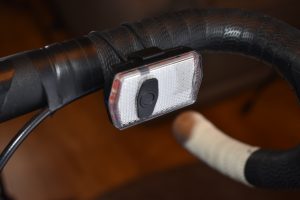 In the box you get the following:

Mounting the lights on your bike couldn’t be any easier, the included mounting rackets are held on to the frame by the now ubiquitous stretchy rubber band, and the fixing can be arranged in such a way that the light can be mounted either vertically or horizontally. To start and stop the light a simple long press on the front mounted button does the trick.

In use the lights are as bright as expected and our testing confirmed their visibility over a long distance – a mile doesn’t seem like too wild a claim.  Also the in-built movement sensors were very good at adjusting the rate of flash dependent on terrain. On a test ride on a local smooth road the lights emitted a steady pulse at the rate of about two flashes every second, but as soon as we encountered some rougher back roads the flash rate increased significantly. The idea behind this is that the rougher road is more likely to cause a fall, so makes you more visible to other road users.

Battery life is always a consideration when it comes to lighting and for such a small package these lights do a great job of giving you a good amount of life. The makers claim 2hrs of battery life in constantly on mode, 10hrs in flashing mode, and 30hrs in ECO mode, and our testing would suggest that those estimates are actually a little conservative and in our test we got around 2.5hrs on constant and similarly we got slightly more than 10hrs in flash mode.

The lights really start to come in to their own when you pair them up with the accompanying smartphone app. By using the app you can perform a number of different functions.

The Crash Alert and Theft Alert features are interesting uses of the built in motion sensors. With the Crash Alert the lights will use the sensors to detect a sudden halt such as a crash or accident, and use the paired mobile phone to send an SMS message to a pre-assigned emergency contact.

Similarly, the Theft Alert may be useful if you stop somewhere mid-ride such as a café, if you leave the lights on while you’re away from the bike, they will switch themselves off after a minute or two, but from then on if your bicycle is moved before you return you will get an alert on your phone to warn you.

Overall we think these lights are worth the higher than average cost given their size, battery life and the variable flashing feature. 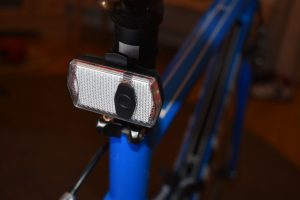 To see these lights in action watch our video review at https://youtu.be/PKC-OwP4XMA

If you found this review helpful please consider supporting us by buying a tea at www.buymeacoffee.com/cyclinglabs