With the Coospo BC107 available almost exclusively on Amazon at a super cheap price is it worth the money?

When it comes to cycling computers there are generally three big players in the market – Garmin, Wahoo and Karoo. Coospo, a Chinese company, are looking to break in to the market and take some of that business for themselves.

The Coospo BC107 has all the features that you would expect from higher end units such as:

It can also link in to any ANT+ compatible devices such as heart rate monitors, cadence sensors, speed sensors, and power meters if they’re available. (None of these were tested during this review)

The only feature it lacks is the ability to perform navigation of any description.

Setting up is simply a matter of charging the unit and attaching it to the bike. If you already have a Garmin mount then it’s even easier as the unit is Garmin compatible. If you don’t need to set up the unit with any ANT+ sensors, or change the units from miles to kilometres then you only need power it up and press the start button to record your ride.

The Coospo BC107 doesn’t have any form of navigation capability so it’s only really useful for recording the ride you’ve done, but at £50 for the unit you can’t have everything.

The unit itself is a monochrome LCD non-touch screen. There are three buttons along the front edge of the unit which turn it on / off, allow access to the three information screens, and cycle through settings options. 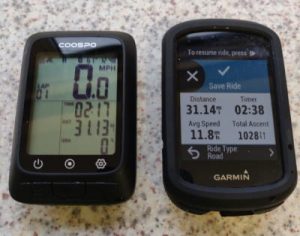 In three test rides running the unit side by side with a Garmin 830 the accuracy of the unit was very impressive. With both units only using GPS for tracking, the rides recorded the same distance to within a maximum difference 0.02 on rides of around 31 miles, this equates to around 0.06% variation between the two units.

The unit comes with its own app called CoospoRide. This is intended to provide similar functionality to that provided by the apps from the major manufacturers. The app will show a map of the 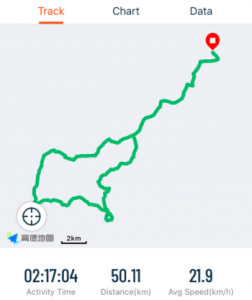 route travelled and all the data uploaded from the unit itself.
In principle this should work easily enough but we did have a couple of problems.

At the time of writing this review we have contacted Coospo with these bugs and they are investigation for us.

If you are a Strava user then all of this may not be important to you as the CoospoRide app has a simple method to link to Strava and rides are automatically uploaded.

If you don’t need navigation, the Coospo BC107 offers incredible value for money in our opinion. At £50 it’s at least 50% cheaper than anything with similar functionality. We give 4.5 / 5.0 because of the app bugs but if / when they’re fixed it would be a worthy of five stars.

If you want to try one of these for yourself buy through this Amazon link in the UK – https://amzn.to/3q5rWpr

If you want to try one of these for yourself buy through this Amazon link in the US – https://amzn.to/3LwVogz

To see a video review of this device visit our YouTube video at – https://youtu.be/6jNxrTe8j7o