When the nights start to draw in many cyclists stop riding but with the right gear there’s no reason not to ride, and one of the most basic things that anyone cycling in the dark needs to do is to make themselves as visible as they can to other road users, whether they be motorists, other cyclists or even pedestrians. 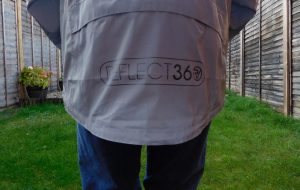 There are many products on the market such as reflective or high visibility sashes, or bands, but one of the most effective is fully reflective clothing, and Pro-viz certainly seem to be the market leader in producing these items.

Pro-viz have a wide range of products such as jackets, gilets, caps, gloves, backpack covers, and arm / wrist bands amongst other things but in this review we have specifically looked at the Mens Reflect 360 Cycling Jacket.

Sizing seems to be generous for cycling clothing which is notorious for being somewhat undersized – I normally wear an XL in outdoor clothing, and the sizing guide on the Pro-viz suggested that an XL would suit so that’s what was ordered, and a few days later was duly delivered.

On first opening the jacket feels heavy but very solidly made, and the styling / cut would suggest that it is aimed more at the commuter market than the performance cyclist or enthusiast, but the sizing was a perfect fit with the above mentioned XL leaving enough room for an undershirt and cycling jersey with plenty of room to move.

In daylight the jacket looks nothing more than a plain grey jacket but once the sun goes down the jacket really comes in to its own. The highly reflective layer in the jacket will reflect even the merest hint of light with an almost magnifying effect making the wearer glow, and providing a large area of light for other road users to see. One of the advantages of the full jacket over a gilet is 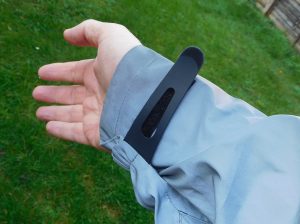 that any hand signals are far more visible.

The construction is solid enough and whilst there is claimed waterproofing of 5000mm hydrastatic head so the jacket should easily stave off all but the heaviest of showers with a storm flap on the main zip, velcro closures on the cuff, a high collar, and slightly dropped back all helping to keep the elements at bay.

I rode this out first time with all the ventilation options closed and quite predictably boiled, finishing the ride drenched in sweat however I was moving at a rather brisk 14-15mph for a lot of the time. On the second ride I opened up all the vents and the ride was much more palatable. 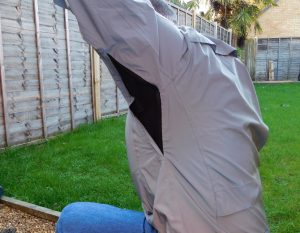 Overall we were impressed by the Pro-viz jacket and whilst it’s on the pricier side for a cycling jacket, the amount of safety it provides makes it worth the outlay in our opinion.

To see the reflective effect in action check out our YouTube review here.

To take advantage of our 20% discount offer click here

Wareham / Lulworth Loop In The Purbecks