Cycling Myths, or Urban Legends, there are a lot of mis-conceptions surrounding cycling that just aren’t true. We have de-bunked ten of the most commonly heard cycling myths below:

Myth: Roads were built for cars – Wrong!
The road structure we use today was first instigated by the Romans almost 2000 years ago – they didn’t have cars. Roads were first developed for horses, then came the bicycle and lastly the car. We agree the car has led to the improvement of the road surface, but they weren’t invented for cars.

Myth: Cycling is dangerous – Wrong!
Cycling CAN be dangerous. If you take risks such as riding through city streets at night wearing dark clothing with no lights or throw yourself in to a gnarly downhill with little training or preparation then it’s dangerous. However if you dress appropriately, ride sensibly, use lights, and ride within your skill / experience level then cycling need not be any more dangerous than any other sport / pastime.

Myth: Cycling is expensive – Wrong!
Again, cycling CAN be expensive. If you want to go out and buy the latest all carbon frameset, with electronic gear change, with all the most expensive accessories and clothing then you wont get any change from £10000, but you can also go out and spend £200 on a new bicycle from a chain store and start riding. If you want to go even cheaper then the second hand cycle market always has some good bargains.

This is one of the most common cycling myths we hear. The Highway Code recommends that cyclists use dedicated cycle lanes where practicably possible however there isn’t any legal requirement to do so. Should cycle lanes be too obstructed, busy, or impractical for another reason cyclists are at liberty to use the road if they wish.

Myth: To Start cycling you have to be fit – Wrong!
Cycling is actually a very good way to start a journey to fitness – it is low impact and easily accessible. Many healthcare professionals recommend cycling as good cardio-vascular exercise. For the unfit even a relatively short cycle ride will be enough to get the blood and endorphins flowing .

Myth: Cyclists must ride on the left – Wrong!
There is no legal requirement for cyclists to ride on the left (in the UK) of the road. Most do out of habit and to help car drivers pass safely. Sometimes riding in the ‘gutter’ can be more dangerous than riding further out. There are drain covers, potholes near the edge of the road, and debris such as grit and stones tend to naturally accumulate there. Cyclists are perfectly at liberty to ride toward the middle of the lane, also known as ‘taking the primary position’. 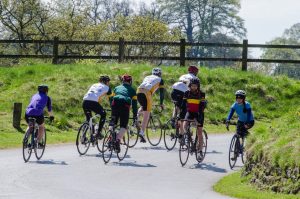 Along with the use of cycle lanes this is one of the most cycling myths. The highway code specifically allows cyclists to ride two abreast where space allows. They do state that two is the maximum permissible and also recommend that on narrower roads that cyclists ride single file to allow motor traffic to pass safely. in some cases a group riding as bunch is easier for a motor vehicle to pass than a group strung out in a line as explained in this article.

Myth: Cyclists shouldn’t be on the road because they don’t pay car tax – Wrong! (and right)
It is true that cyclists don’t pay car tax, but then nor does anyone else – it was abolished in 1937. What most people are referring to is Vehicle Excise Duty which is essentially a tax on emissions. As a zero emission form of transport cycles are exempt from this tax. Another good counter for this myth is that many cyclists also possess a car, so they have actually paid their VED and are thus entitled to use the road.

Myth: You can get points on your motor licence for cycling offences – Wrong!
Logically this can’t happen as not every cyclist has a motor licence, so how could this happen? Whilst in theory it could happen for cyclists with a motoring licence the complications of having two systems, one for those with and one for those without licences would be too difficult to manage. Cyclists can receive fines for breaking laws, anything from a £50 spot fine for minor offences up to £2500 for serious infractions

Myth: You need loads of gear – Wrong!
This is closely related to peoples perception that cycling is expensive, but essentially all you need is a bike. If you want to ride further, or faster, or have a more adventurous times then you may want to invest in specific clothing, different bicycles, accessories, and tools but at its simplest level all you need is a bike.

If you found this advice helpful please consider supporting us by buying a tea at www.buymeacoffee.com/cyclinglabs