Unless you’re dedicated off-roader you will at some point have to mix it up a bit with the traffic and ride on a street. Many people are understandably nervous about riding in traffic, but with a few simple preparations riding in even the busiest traffic can become a lot less daunting.

Be aware of your surroundings – In order to avoid sudden swerves, braking, and manoeuvres keep an eye out for poor road surface, drain covers, speed humps, general road furniture and parked or slow moving vehicles. Also try to anticipate oncoming road junctions, traffic lights and roundabouts etc. Also keep an eye on anything that is nor on the roads but could be such as pedestrians stepping out, animals, and children.

Watch for car doors – dozens (or maybe hundreds) of cyclists each year are involved in accidents caused by drivers or passengers opening car doors in to the path of a cyclist. If it’s safe to do so 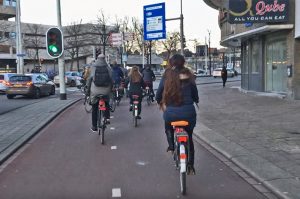 then we would recommend passing any motor vehicle widely enough that should a door get opened you’ll still miss it.

Make your intentions clear – Basically do to other road users as you would have them do to you. Give clear signals of any manoeuvres you are intending to make, do it early and maintain the signal for as long as you can. It’s also a good idea where you can to make eye contact with other road users, that way you can be almost 100% sure that they’ve seen you and know what you’re going to do.

Keep out of the gutter – Initially this sounds counter-intuitive, but if you ride too close to the gutter not only are you likely to be riding in a whole bunch of road debris you also tempt car drivers in to trying to overtake. The common term for this is ‘taking the primary position’ and is used to describe riding towards the middle of the lane – not only is it cleaner, it shows motor vehicles that there isn’t room to pass safely. Of course we wouldn’t encourage you to hog the road, if you can ride in a safe position that allows cars to overtake safely then do so.

Make yourself visible – there are a myriad of things you can do to make yourself visible from Hi-viz clothing to lights. On of our favourites is to kit your bike out with daytime running lights. Flashing front and rear LED lights can be bought fairly cheaply and will help to alert other road users to your presence.

Watch out for lorries – lorries are notorious for having blind-spots on the passenger side and if you’re passing on the passenger side be very, very, careful not to get caught out in one of those spots. In fact we would advise to never move up the side of a lorry, much better to be a few feet back and safe than injured (or worse). 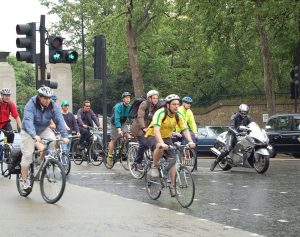 Keep your hands near the brakes – the busier the traffic, the more likely it is that you will need to make an emergency move or brake suddenly. if your hands are ‘on the drops’ or at the top of the bars you may not get to the brakes in time, try to ride with a couple of fingers resting on or over your levers and be prepared to brake at a moments notice.

Cycling In The Heat – How To Stay Safe